On World Rhino Day, the 22nd of September 2015, a small group of South Africa’s finest Trail Runners were asked to ascend the iconic Rhino Peak in the Southern Region of the Maloti Drakensberg World Heritage Site. While establishing new FKT’s (Fastest Known Times) for the Rhino was a partial objective the main focus was to raise awareness, in a unique way, to the plight of Rhinos as well as the other endangered habitant of the Rhino Peak itself, the Bearded Vulture. These two very different creatures are a powerful symbol for South Africa’s threatened species and having these elite runners doing something special on the only Peak over 3000m in the world that resembles a Rhino sent an unprecedented message on behalf of the conservation community.

In 2016, in line with the plan to launch off the foundation of 2015, the participants in the Rhino Peak Challenge (RPC) were increased to 2 teams of 12. The first group consisted of 12 of SA’s Elite Trail Runners and the second group comprised of Persons of Influence (POI’s) from the world of Sport, Conservation and Entertainment. Using the FKT’s established in 2015 of 2hr45 and 3hr25 the Elite Men and Ladies were given cut-off times of 3hr30 and 4hrs respectively for their runs while the POI’s were allowed to set their own goal times.

A system was then set up whereby each runner had a profile on the event website and the public was able to pledge an amount on one or more of their chosen participants. This pledge was then linked to the runner’s cut-off or goal time by means of a multiplication factor. So for example, if someone pledged R10 on a runner and that runner then ran 20 minutes under their goal time then the pledge would be multiplied by a factor of 20.

The day went off extremely well despite the gale force winds. New FKT’s of 2hr34 and 2hr45 were established by Rory Scheffer and Holly Page and all of the participants raised substantial amounts of money totalling nearly R 300,000.

In 2017 we will once again be following the format of 2 teams of 12 runners and we are hoping to attract some of the country’s foremost athletes. The pledge system will once again be used with the only difference being that the minimum pledge multiplication factor will be set at 10 and the maximum factor limited to 45. So if a runner is unable to complete the RPC for any reason then all their pledges will be multiplied by a default of 10 and should they run faster than 45 minutes under their goal time then their pledges will be multiplied by a maximum of 45 and no more.

As an added incentive for those pledging we will be asking each of the 24 participants to come up with a lucky draw prize. This prize will be drawn by the runner after the event and anybody who has pledged on that particular runner will stand a chance to win their prize. The draw will be weighted in favour of the amount pledged, so the more you pledge the higher the chance you have of winning the prize.

How The Pledges Work

The benchmark goal times were set in 2015. Johardt van Heerden and AJ Calitz managed an FKT for the Rhino of 2 hrs 45 min and Tracy Zunckel and Su Don-Wauchope pulled off a FKT of 3 hrs 25 min.

This year the goal times will be set at 3 hrs 30 min for the men and 4 hrs for the ladies. Each pledge that every participant receives will be multiplied by the number of minutes they are under their respective goal time. So for instance, if Johardt runs a 2 hrs 45 min then all his pledges would be multiplied by 45 (minutes).

Each of the Elite Runners and Influential People will have their profile uploaded to the website and their pledges will be visible on their own Pledge page.

The Endangered Wildlife Trust (EWT) is the official beneficiary of the event and all funds raised will be divided on a 50/50 basis between their EWT Sniffer Dog Programme and the EWT Bearded Vulture Captive Breeding Programme. The reason that the funds will be divided in this manner is that the Rhino Peak itself is home to some of the last Bearded Vultures in the area and the species is now critically endangered. It is believed that the concept of two threatened species working together to save each other will capture the imagination.

For more information and to pledge your support please visit www.rhinopeakchallenge.co.za. 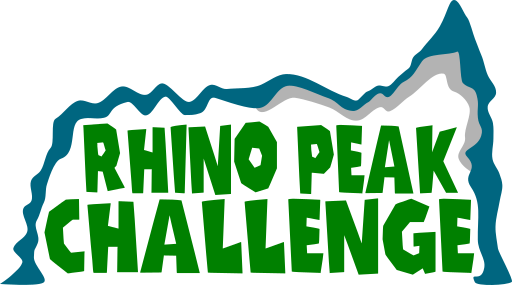