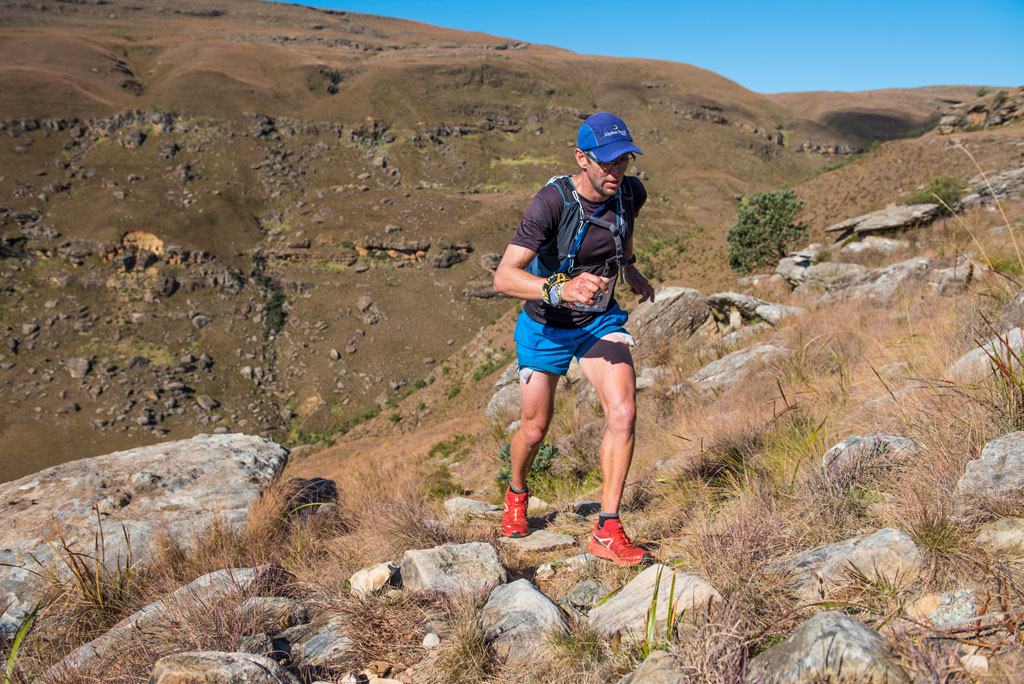 Ultra runner Hylton Dunn won the overall line honours at the 2018 Giants Cup two-day trail run in the Southern Drakensberg, in the same convincing way that he beat his drug addiction to become the formidable athlete that he is today.

The Eastern Cape athlete started the 30 kilometre second stage from Castleburn to the First Resorts Bushman’s Nek Hotel with a massive thirty minute lead in the bank over Mazu Ndandani, and he replicated his first stage dominance to stretch that lead relentlessly on the final leg.

By the time he crossed the finish line on the lawns of the Bushman’s Nek hotel, he had driven an imposing half an hour wedge between himself and chasers, Ndandani and Travis Green.

“I really enjoyed it! It was beautiful weather to start off with, cloudy and misty, and then we got above the clouds and the mist,” said Dunn.

“Like the first day there was bit of everything, climbing up and down, fluctuating, but there was a lot more runnable stuff up top and then a nice brutal climb to end off with,” he added.

“I really thought the finish was at the old lodge so I had a nice surprise with another kay and a half to go,” he said.

“I am really happy with everything,” he added. “It was a really great route.”

Dunn has become something of an iconic figure in the trail running and road running community for the determined manner that he beat a spiralling drug addiction problem, through ten years in rehabilitation centres, before embarking on his trail running career.

Dunn is training for his fifth SkyRun, a gruelling race in which he has already finished fourth, and runs a high-altitude training centre from his home in Rhodes, not far from the Giants Cup route through the southern Drakensberg.

After running together for the early part of the final stage Ndandani broke away from Green on the descent into the finish, to secure the second place by six minutes.

The women’s title fell to the on-form Sally Fenwick, who added a further twenty minutes to her eight minute first stage lead after getting to grips with her blood sugar problems.

“I am a diabetic and I really battled with my blood sugar on the first stage,” said Fenwick.

“I got some really good advice from the doctor overnight and today was a much, much better day.

“The views on both days are absolutely magic,” she enthused.
Anri Visser consolidated her second place, while Michelle Theron sealed the last spot on the women’s podium.

The two-day event is aimed at the less serious trail runners, and allows them to enjoy the comforts of overnighting at the Premier Sani Pass hotel before the start of the race, the Gooderson Drakensberg Gardens hotel, overnight and First Resorts Bushman’s Nek hotel after the event, which organisers insists is far more an event, than a competitive race.
SUMMARY OF RESULTS – GIANT’S CUP DAY TWO – 30km Castleburn to Bushman’s Nek hotel