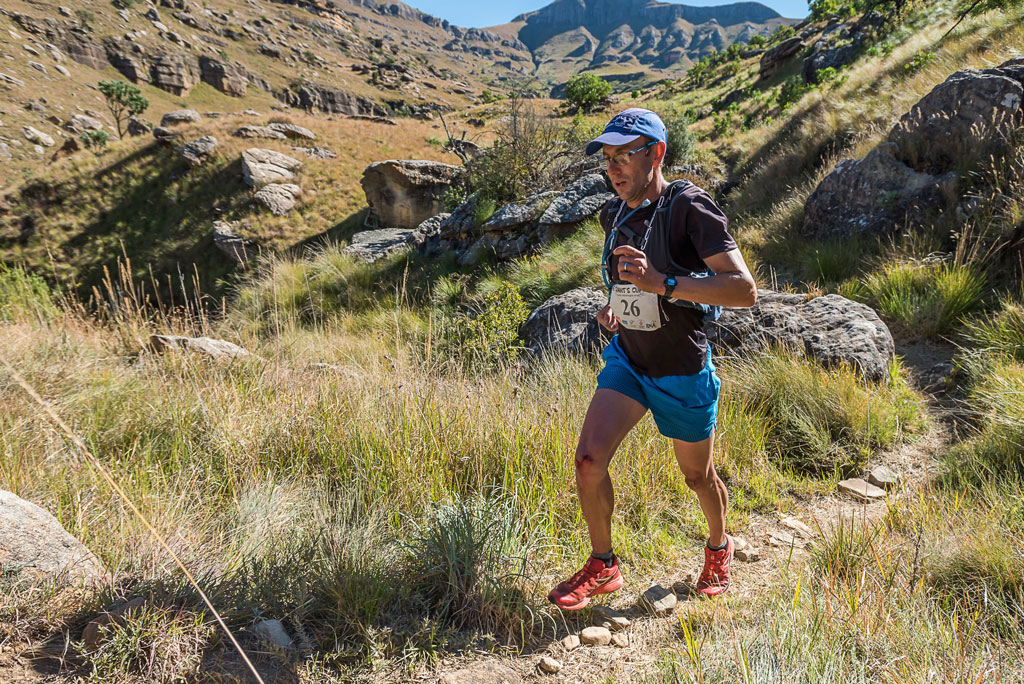 The 32km first stage of the Giant’s Cup trail run in the Southern Drakensberg was completely dominated by experienced trail runner Hylton Dunn who won the stage by just under 30 minutes while Sally Fenwick took the ladies honours on Friday.

For Eastern Cape-based Dunn, there was a care taken to conserve himself on the opening day of the race but his time suggests that he blitzed through the course despite finding the going tough at stages.

“The pace was really quick along the golf course at the start and didn’t really slow up at the first check point.

“There were a lot of climbs, especially after the first check point which made it more difficult and technical in places.

“It was really tough and I had to do some scrambling up rocks at times but the course is beautiful and the race is beautiful too.

“There was also a lot of open trail where you could really open up and pick up some good speed.”

Dunn’s domination through the opening stage of the two day race has all but put the contest to bed, but his build up has been geared towards this race before he looks to other events later in the year.

“I have been training really hard for this race and it is important in the greater scheme of things for me. There are some big races coming up later in the year so this is a big part of my preparation.

“The races later in the year are important but there has been a lot of time and effort put into this race specifically.

“There is the Rhodes Run and then my home race Heaven and Hell and then I will also be doing the SkyRun so Giant’s Cup is playing a crucial role for me,” he explained.

Following Dunn’s blitz, which was 38 minutes faster than the stage one winning time in 2017, the race was for second and third and it was Mazu Ndandani who came home in second followed by 2017’s third place finisher Travis Green.

Travis Pellew finished in fourth six minutes behind Green while Max Miller rounded out the top five after day one.

The ladies race is far closer although it too sees the leader take a substantial buffer into Saturday’s second stage.

Sally Fenwick took home the day one honours in a time of 04:39:20 which is eight minutes faster than second place Anri Visser.

Visser has an incredible 46 minute advantage over third place runner Michelle Theron who is two minutes and 22 seconds ahead of Joanne Gibb in fourth and Travis Green’s wife Fiona rounds out the ladies top five.

The second and final stage of the 2018 Giant’s Cup is a 30km stage that will take runners from the overnight stop at Castleburn to the Bushman’s Nek Hotel on Saturday.